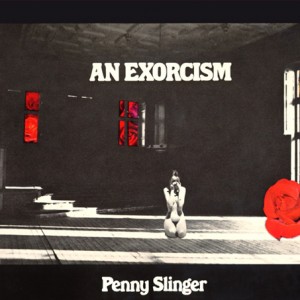 “The Slinger novel now in preparation is a cascade of photo-collage imagery which has all the emergent trepidation of Herman Hesse’s ‘Steppenwolf’.” Art and Artists, 1973.

“Penny herself plays a central part in the illustrations. “I had to carve up my inhibitions. You need detachment to make yourself into an image. I am no exhibitionist. The world just doesn’t apply. In my collages, I am not myself – just a vehicle…I am really invisible, what you see are the feelings…”‘ Penny Slinger, Art and Artists, 1973.

Peter Fuller says about one of the collages in ‘An Exorcism’ Connoisseur magazine 1974, “If we look at the collage carefully enough, we never look at a painting of a female nude in the same way again.”

“The kernel of this work remains a statement about women’s sexuality. The theme may be found, for example, in some Indian sculpture – but has usually been rigorously excluded in the European tradition. Slinger had the exceptional courage to introduce it, using herself as both artist and object, refusing to stop until she had seen and revealed herself as she was, and not just as she was required to appear.” Peter Fuller, Connoisseur.

“The exorcism in which Penelope Slinger found it necessary to embark came about entirely of her own choice…But simultaneously in doing so she was entering with ‘mystical participation’ into a drama of the widest generality. Instinctively the primitive psyche has provided Penelope Slinger with a brilliant means of expressing her drama. Highly charged both with the circumstances of her dreams and her daily life, she unfolds the myth born from her own experience, the anatomy of her psyche, closely entwined into primordial images.” Sir Roland Penrose, Introduction to Book.

“One cannot deny the skill of the artist and the images linger in the memory long after the book has been set aside, this is visual storytelling at its best.” The Artist, 1978, review by Jack Yates.

“Readers can take it as romantic detective story, composite myth or as a model for self-analysis.” Sheila Hayle, Harpers and Queen, 1977.

There are no reviews yet.

Be the first to review “An Exorcism” Cancel reply